While in the Rumyantsev Museum both works were attributed to Marco d'Oggiono, and later to the Gaudenzio Ferrrari school, assumed to have been painted by Girolamo Giovenone. In the Pushkin Museum it was long held to be a work by Gaudenzio Ferrari. As early as 1913 H.Voss had suggested that the pictures in the Pushkin Museum had served as side panels of a triptych, painted by Gaudenzio Ferrari c. 1507 for the chapel of Sta. Margarita in the Church of Sta. Maria delle Grazie in Varallo. He considered that the Madonna and Child in the Pinacoteca Brera in Milan had been the central part of the triptych. 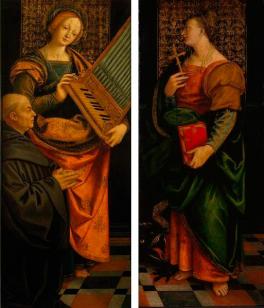