One of the many repeated versions of the composition by Francesco Bassano from the series Seasons of the Year, the first version of which was painted by Jacopo Bassano. The repeated variants, which have come down to us, are re-workings made in the late 1570s or -80s in the workshops belonging to the brothers Jacopo, Francesco and Leandro Bassano. There exist no less than eight variants of the composition Summer. The finest of these are held to be those in the Kunsthistorisches Museum in Vienna and in Castello Sforzesco in Milan. 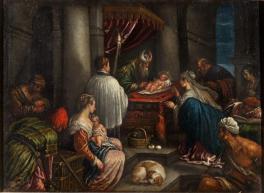