The meaning of the picture, which deals with the theme of family duty and sacrifice, is revealed by the artist in one of his letters. He explains that the fisherman's wife has died leaving him with two children, one a newborn baby. The work is a sketch for a canvas executed two years later (Musee d'Orsay, Paris), but its unfinished state has independent artistic value. The washed-out colours and matt texture of the painting emphasise the sad atmosphere and timelessness of what is taking place. 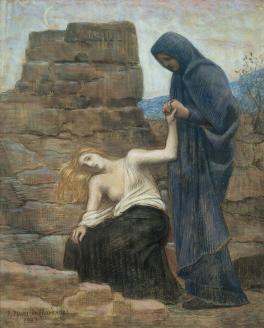