House of Impressions. Wandering with a Troubadour

Princes Golitsyn’s Family Estate that constitutes a part of the Museum Quarter of The Pushkin State Museum of Fine Arts continues its activity. The new exhibition project ‘House of Impressions. Wandering with a Troubadour’ represents a development of reflections on contemporary artistic vision and language. Artists participating in the project become modern troubadours; they address universal means of communication – sound and music – that make it possible for various communities to understand each other when words are unable to do so.

The exhibition offers a possibility to reflect on a harmonious coexistence of a human being and the society in the modern world, on the attempts to find and keep one’s voice, to gain and never lose one’s own melody. The curator’s idea is to fill the space of the main building of the 18th-century estate that changed its owners and appearance many times over the three centuries of its history, with new sounds.

The project features 18 Russian and foreign artists whose main focus is memory, identity, self-determination, and freedom. The exhibition not only offers visitors an opportunity to immerse into the artistic space filled with sounds but also to observe the process of creation of a new language.

There are 18 Russian and foreign artists participating in the project. The participants of this exhibition employ the theme of improvisation in sound and video. Memory, identity, self-determination and freedom are their main themes.

Such works as Unravel by Anri Sala (2013), Soundmaker (2004) by Julian Rosefeldt, Satan is Real (2007) by Ragnar Kjartansson, and a new project of Camille Norment will be exhibited in Moscow for the first time. Opera Calling. Arias for All (2007) of the Swiss group !Mediengruppe Bitnik that challenges established social and cultural structures with their Internet projects, will be a Russian premiere as well. Carmen Weisskopf (b. 1976) and Domagoj Smoljo (b. 1976) placed microphones within Zurich Opera. These bugs transmitted performances of Zurich Opera to randomly selected local telephone landlines. Anyone who picked up their telephone was able to listen to the opera performances live.

Some of the artists produced new pieces especially for the exhibition. In Sasha Pirogova’s MONO projects (2016), Tomorrow Will Be the Same (2015–2016) by Petr Zhukov and Kirill Shirokov, Marina Chernikova’s Symphonic Surfing //  M 3-16 (2016), artists used audio and video improvisation to create a polyphonic space for a dialogue about inner and outer territories with the viewer.

The exhibition includes two site-specific performance pieces created by the director Semyon Aleksandrovsky (р. 1982), founder of an experimental Pop-up theatre, and the composer Petr Aidu (b. 1976). Petr Aidu’s noise installation Sound Transformation (2016) represents a labyrinth intertwining the roles of the listener, the performer and the musical instrument. On Saturdays and Sundays Semyon Aleksandrovsky (b. 1982) invites visitors to an audio journey to ‘another museum’ – Van Gogh Museum and Stedelijk Museum in Amsterdam, Musée Rodin and Centre Pompidou in Paris, Peggy Guggenheim Collection and Palazzo Grassi in Venice. Binaural microphones, which recorded these walks, create the effect of presence when listening, and the visitor gets immersed into the sound ambience of a European museum.

Medieval troubadours, the comparison to whom is the key concept of this project, are associated with poetry, chivalry, and courtly love. But the influence of these itinerant musicians on the morals and worldview of the society of the time was much broader and proved to be unprecedented in the history of medieval poetry. They were the first to talk about the world as representatives of high culture while remaining accessible to common people: they performed their songs both at court and public squares.

The word troubadour comes from the verb trobar – to create, to find, to invent. The main task of these poets and musicians was to create a new language. Similarly, today’s ‘new troubadours’ create the new language of art – they mix poetry, video, and music to communicate an emotionally charged experience and their message to the viewer. Music, text, and images intertwine in works of each artist, giving a unique experience for each viewer.

The polyphony that is a foundation of the very nature of musical sound and melody becomes the main principle of the project’s framework. The educational program of the project will feature a lecture course focusing on musical and textual structures and creating a new language, and will continue the study of intersections between the culture of medieval troubadours and contemporary artistic experiments. The display, already moving and breathing, will come alive every day in a new way through various performances of musicians and actors, through the sound of various musical instruments. Thus, the exhibition will attract representatives of all sorts of artistic communities, free troubadours — poets, musicians, artists, dance performers; it will sound as an orchestra — polyphonic and improvisational, composed of a number of voices.

Brief description and a map of the exhibition in English 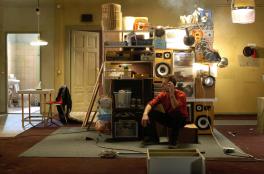