On February 26–28, 2018 the Pushkin State Museum of Fine Arts holds annual international Vipper Conference on the topic Classics and Contemporaneity. Reflections. The conference, which was first held 50 years ago, in 1968, is devoted to the development of theoretical and practical basis of the new museum direction – Pushkin XXI. Leading experts from all over the world will take part in the conference: museum directors, curators, artists, professors from Russia, Belgium, Great Britain, Germany, Denmark, Italy, Netherlands, Norway, USA, Switzerland. Among the invited speakers are Kasper Koenig, Matthew Gale, Peter Osborne and many others.

The collection of the museum began to form more than 100 years ago, when it was a collection of casts. Consequently, the collection increased due to genuine works of art. Today it's time to create a collection of works of contemporary art and write its history, while not forgetting about the past. It was this approach that formed the basis of the new direction – Pushkin XXI.

The study of the evolution of images, the search for the commonality of the ideas in classical and contemporary art will become the main themes of the conference. Discussions and round tables will be devoted to various concepts of the development of art museums in the world, building links between past and present in exhibition and educational projects.

The central event of the conference will be the presentation of the first in Russia collection of media art created with the support of Mail.Ru Group. A new unique collection of contemporary art, formed within the framework of the Pushkin XXI direction will be the first of its kind. It will include works by the classics and artists of the latest generation in the field of media art and performative art. Among the first works of the collection are the projects of Jonas Mekas (USA), Gary Hill (USA), Marianne Heske (Norway) and the trilogy of the Russian art group Provmyza (Galina Myznikova and Sergey Provorov) Despair (2008), Inspiration (2010), and Eternity (2011).

The works of the art group Provmyza from the collection of the Pushkin Museum can be seen at the exhibition in Hall 31 of the Main Building starting from February 27. The exhibition will open with the premiere of the artists' performance "Post-mortem chronography", which will be created specifically for the museum space. Performance refers to the classic themes of pain and compassion through the universal emotions refracted by contemporary media culture. The unification of epochs and the building of complex links is aimed at introducing the visitor into the theme of art through the super-emotion. The space of the museum turns into a total performative space, where among the sculptures and paintings unfolds an epic drama of children's awareness of themselves as a sensual substance in today's world.

The conference program consists of five thematic sessions, supplemented by a series of special events for a wide audience.

The first day will open with the session Vipper Conference. Problematics devoted to discussing the theoretical basis of the new direction Pushkin XXI.

The second session Constructs In Art History and Contemporary Art Process will address how the new media and technology development influence the development of art process.

The second day will open with the session The Acquisition Of A New Language And The Somatic Experience Of Perception, which will address performative experiences and inverventions in the museums, as well as problems and themes revealed by contemporary bodily practices in present and inherited from the past.

The second session of the day titled The Threats And Challenges Of Contemporaneity In The Museum. New Classics And New Collections will be open to the wide audience and will be key to the whole conference; it will be devoted to strategies and curatorial practices that allow connecting contemporary art with the classical in one space.

The final event of the session is the open discussion moderated by Milena Orlova, editor-in-chief of The Art Newspaper Russia.

On the third day, the final session will be held under the title "Internal Vision” Versus Retinal addressing the evolution of vision as a factor in development of art.

Special events of the conference: presentation “Creating dialogues in art. Curating ten years of exhibitions in Palazzo Fortuny” by Daniela Ferretti (Italy), Curator, Director of the Palazzo Fortuny, and Axel Vervoordt (Belgium), curator, collector, founder of the Kanaal project, and performative lecture “Legends, myths and traditions. Performative experience of diving into the history” by Tori Wrånes, Norwegian artist and vocalist. 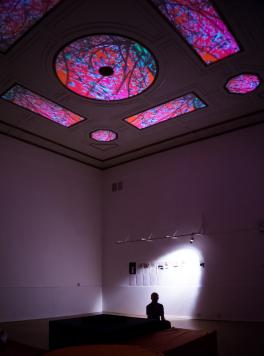